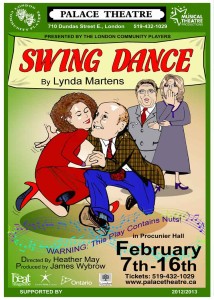 Sexuality in one’s elder years is still a vaguely alien concept and exploring its humourous side is part of what made The Golden Girls a television comedy mainstay. In that regard, Swing Dance is a hilarious, yet touching, variation of the theme as an older baby boomer couple find their own fire unexpectedly relit with unsuspecting friends.

On Vicky’s (Dinah Watts) birthday, her satisfaction with her successful home business is complicated by her husband, Walter (Joe Belanger), having a pot-induced epiphany to reinvigorate both their lives. As they argue over its practicality, Walter ups the ante by taking a dose of Viagra just before Vicky’s business partner, Fred (Paul Bowen-Smith), and his wife, Sally (Liz Marra), come over for dinner. Desperate to avoid embarrassment, Vicky and Walter desperately try to hide the results of their sexual quarrel, unaware that their visitors have a salacious suggestion of their own for them.

With Boomer mid-life crisis as story material in The Big Chill now decades old, Swing Dance takes on the passage of elder Baby Boomer sexuality with creative verve. For one thing, the cliches of senior citizens are neatly avoided with the characters being vivacious and active with their lives with differing degrees and expectations. Instead, the story works on the conflict of competing expectations of their lives in a comedy of misunderstandings and sexual innuendos that feel remarkably both tasteful and humourous.

In service of that plot, Belanger and Watts have to do the heavy dramatic lifting as their characters set the basic premise and the play drags a bit in the first third with that obligation. Regardless, Watts plays her role amusingly straight as an older woman seeming the most self-sufficient of the bunch, but is at a loss to handle Walter’s enthusiasm, played with a welcome cheeky energy by Belanger. However, once the situation moves from the philosophical debate to the Viagra popping, the clash between Vicky’s practicality and Walter’s impulsiveness truly allows the play to take off with some ribald physical humor. When Fred and Sally arrive, the play soars to the comedic heights with a hilarious interplay of double entendre wordplay that the cast performs perfectly.

For their part, Bowen-Smith and Marra help make that dialogue work as a couple clinging desperately to their youth, which makes their misunderstanding a kind of subconscious wishful thinking. That really pays off in the second act where the misunderstanding’s amused explanation moves on to Marra creating a moving performance of Sally’s deeper insecurities.  By contrast, Bowen-Smith works in a fun and odd kind of passiveness for his character as he gets caught up by the best side of any of his wife and friends’ intentions. It’s like he knows he is being steered around, but chooses to ride it out with a quiet abandon. The result is an ending that may seem a bit too safe depending on one’s point of view, but it still feels satisfying as our heroes find a balance to their lives.

Finally for a story about such intimate matters, tiny Procunier Hall is perfect, beautifully dressed as a home. Even better, the small scale is neatly hidden with the use of doors giving the setting an illusion of space where characters can retreat if necessary. Furthermore, the costuming is exquisite with a combination of beauty and thematic importance that helps drive the story as it reinforces the humour. The result is a small scale production that feels like a rich theatre experience with its sheer immersiveness.

Watching this play with these youthful at heart characters will remind you what Franklin said in the Peanuts comic strip about what his grandfather felt about being old: “When you’re over the hill, you pick up speed.”