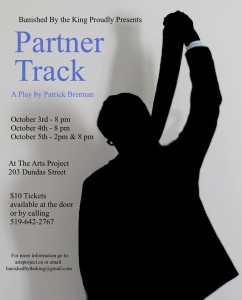 The corporate ladder can become a slippery slope all too easily and business law has the darkest reputation for that. In that spirit, this play is a darkly humorous satire on that kind of workplace as the hired staff find themselves confronting their way.

In a major corporate law firm, a partner is killed in a traffic accident. That means there is now a vacancy in the partnership and the hired staff find themselves having a shot to get it. What follows is an impromptu promotion contest in which the staff’s personalities and priorities are put to the test with some stark perspective.

Corporate culture and employee rivalry is prime material for drama like Glengarry Glen Ross; this play is an inspired comedic version with much of the cynical humour of the comic strip Retail. In this case, the characters find themselves hip-deep in a rapacious business culture where tragedies shift to opportunities with callously breathtaking speed. As the characters struggle in their own ways to cope with that mindset, it proves a fascinating emotional mosaic of such disparate personalities, even when the management has a different opinion. How that opinion is expressed is a powerful twist that will appeal to your more cynical assumptions, even if it makes it a touch predictable if you think that way.

With that idea, the players bring their characters’ humour to dazzling life, climaxing in a hilarious blackout montage of job interviews, each addressed in its own way. For instance, Dylan Rock plays the ideal everyman as Marty, a lawyer who has a growing intelligent disgust for the business, although he is saddled with a bit too much of the emotional exposition in the beginning. Shana Train plays off the whole cast well as Cathy, the most conscientious one in this bunch, with high moral principles that clash starkly with the others’ ethics but leave her with her own price to pay.

By contrast, Patrick Brennan plays his role over the top as a twit so hysterical who will have you wondering how he can keep his job, until you get your answer at the end. George Hamzo has a more delicate part as Brad, a shameless yet desperate opportunist, and Hamzo pulls it off with a balanced performance that never overbalances his character to into cliche villainy. Rachael Billington plays an entirely different archetype well as Jade, an acid tongued cynic who has experienced the worst of office sexism and is not afraid to stand up to it, even when it seems career suicide. After seeing so much of the idea of toadying to the boss in corporate life, just seeing Jade snarl back and have the practical means to legitimately fight back as well is a refreshing concept.

As for Sean Brennan, his Marshall character seems so obviously a Mary Sue cliche of unreasonable perfection that the twist involved is a resolution disappointingly easy to guess. However, he does pull off the character with vibrant aplomb to make the resolution work through sheer audacity. Nic Bishop’s Gary is a well-meaning nebbish determined to be the ideal corporate drone. Although he first comes off as stiff, Bishop’s preternatural comic talent comes to the fore immediately as an inspired clown with subtle funny business in the background as inspired as Art Carney‘s was as Ed Norton in The Honeymooners. Bishop is the highlight of the whole showm and I would love to see him star in an appropriate vehicle.

In fact, Bishop is even better with the great stagecraft, such as when he hosts the late partner’s memorial montage, a ridiculously fake PowerPoint presentation set to Enya’s Only Time. You just know how Gary is so totally out of his element presenting this meaningless emotional token, and Bishop makes the farce work so well. Otherwise, the show is beautiful black box theatre with a few tables, chairs, laptops and a venetian blind needed to sell the corporate office setting.  The sound effects for the traffic accident bring the drama to a vital high point to get the plot going naturally.

Corporate office work life is often not a place for the naive or the unambitious, and this play illustrates that with great comedy and real soul.