Fetching melodies, razor-sharp lyrics and zingy one-liners are the order of the day in this brilliant adaptation of the hilarious tongue-in-cheek comedy about love (what else?) in all its neurotic glory and pain.

It all takes place on the Brooklyn Bridge. Harry, despondent, is about to end it all by jumping off; but his old school buddy Milt (who also happens to be at the bridge that night — to kill his wife, Ellen) coaxes him off the ledge. When neurotic Harry and brainy Ellen fall in love, allowing Milt to run off with the girl from the office, it looks like everything will turn out rosy. But one year later, Ellen no longer loves Harry, Milt wants his wife back, and together they plot Harry’s demise on the same bridge where they’d saved his life.

Based on the play Luv? by Murray Schisgal, What About Luv? features great comic roles; Nathan Lane was the original Harry. This musical offers a scintillating mix of dead-pan comedy and incisive writing, with some of the funniest lyrics ever. 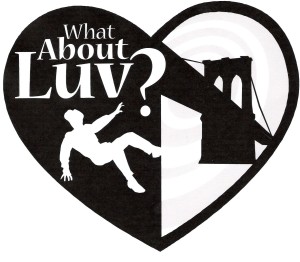 Based on the play Luv? by Murray Schisgal