The gentlemanly Captain of the Pinafore, who claims that he would never swear at his crew, does not know that his daughter has fallen in love with a common sailor serving on her father’s ship. Meanwhile, the Captain has arranged for her to marry the First Lord of the Admiralty, Sir Joseph Porter, KCB. Sir Joseph, himself, has risen from humble beginnings to gain his office by political acumen, despite having never gone to sea.

And the Captain, himself, fancies a poor bumboat woman…little Buttercup. Fear not: it all works out in the end. Hip, hip, horrah! 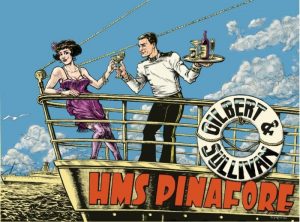