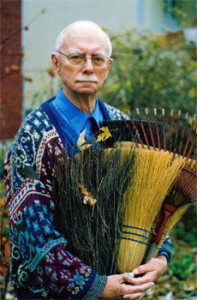 Nobody brought together the commitment to the local, the awareness of the universal, the sense of fun and the poetic vision as Jamie did. We won’t see his like again, but we will see his influence and inspiration everywhere.

Among his many accolades are three Governor-General’s Awards for poetry and drama, the first of which he won in 1949 at the age of 23 for a collection of poetry, The Red Heart. His famous Donnelly trilogy of plays from the 1970s is listed among the 1,000 most significant plays of all time by the Oxford Dictionary of Plays.

Among my favourite personal memories are the two or three afternoons that I spent at his house, going over his play One-man Masque, which I was getting ready to perform, getting background stories and insights and hints about rhythms and images and presentation. That was part of the Reaney Days tribute of 2002, an idea initiated by Chris Doty. There seemed to be a lull in public presentations of Jamie’s work at the time, and Chris was adamant that since Jamie would not be around forever, we shouldn’t wait until his death to re-discover his work and start paying tribute. So we did plays, films and poetry readings at the library, the museum and the Grand.

Since that time, though, he seems to be everywhere: Sticks and Stones at Stratford, Listen to the Wind and Through the Looking Glass and a Listeners’ Workshop in London, The Easter Egg and Masques for a Reaney Day in Toronto, performances poetry with teenagers at The Arts Project, a new book of poems, art exhibits in London and at the McMichael, a forthcoming collection of his plays, and a stage adaptation of The Box Social coming up in Toronto. And others, I’m sure, that I have missed.

Brilliance is not always appreciated or celebrated, and I’m very happy that Jamie is alive and well in all of this artistic activity.

The piece that I always linked most personally to James Reaney is the final poem of One-man Masque:

Long have I looked for my lost child.
I hear him shake his rattle
Slyly in the winter wind
In the ditch that’s filled with snow.

He pinched and shrieked and ran away
At the edge of the November forest.
The hungry old burdock stood
By the dead dry ferns.

Hear him thud that ball!
The acorns fall by the fence.
See him loll in the St. Lucy sun,
The abandoned sheaf in the wire.

Oh life in Death! my bonny nursling
Merry drummer in the nut brown coffin,
With vast wings outspread I float
Looking and looking over the empty sea.

And there! In the – on the rolling death
Rattling a dried out gourd
Floated the mysterious cradle
Filled with a source.

I push the shore and kingdom to you,
O winter walk with seed pod ditch:
I touch them to the floating child
And lo! Cities and gardens, shepherds and smiths.

I think that I’ll always hear Jamie, shaking his rattle slyly in the winter wind.