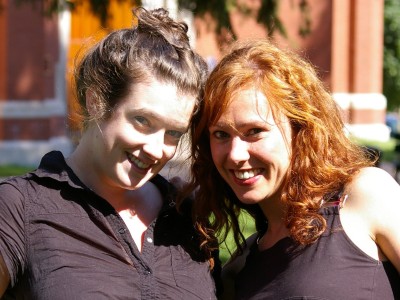 “It’s a one-woman comedy show about a girl trapped in a board game. It’s a real roller-coaster ride for the audience.”

“I hope that people leave thinking about their own situations, get something out of it.”

Christel Bartelse and Colleen O’Reilly are anything but chaotic as they discuss Chaotica, a “one woman madcap comedy” which sees its Fringe premiere this week. Although they hadn’t worked together before this show—a mutual friend introduced them when she couldn’t do the project—you’d never know it from the way each of them fill in and play off the other’s ideas and even sentences.

The play, which Christel wrote and performs in, marks the “Fringe veteran”‘s debut as a solo performer. A former member of a Toronto-based group called Burnt Marshmallows, she describes the experience of the solo show as an experience with its pros and cons: “It’s really fun and rewarding, and then […] you run off stage and there’s nobody else there.” Stage manager Colleen has been “a huge help” in that respect, as well as in her other roles in the very physical show.

This is the first time at the London Fringe Festival for both women, who weren’t sure what to expect after participating in some of the larger festivals in Toronto and Edmonton. The Fringe staff has been “amazing”, and Colleen was pleased to learn that “there’s a buzz. People are into it. […] They’ve got their schedule, they’re seeing 20 shows.” On top of that, “it’s great that they’re all real theatres;” Christel “walked into the theatre and went, like, ‘Thank you.’ I think it’s really perfect for my show.”

Also an accomplished clown performer who has studied with Sue Morrison and performed with Mump and Smoot—“a huge honour and an amazing experience”—Christel is leading a workshop session on Thursday afternoon. It’s “basically an intro to clown. We start off with a sense of play and some games, and then there’s a few exercises, and then eventually… I bring clown noses to the workshop so everyone will get a nose and they bring a hat and they get to find their own clown and just play around a bit. […] I thought that was a really cool aspect of the [London] Fringe, to offer that to performers, if you have a skill you want to teach.”

Christel and Colleen are making the most of their time in London; I even saw them at Ribfest in Victoria Park on Friday afternoon. “We’re trying to be involved as much as possible because we can, that’s what we’re here for,” Christel says. “You start flyering, going to shows, you’ve met people, and our days are filled.”

Chaotica is the Impresario show for the Spriet Theatre, and will have an additional performance at 8:30pm on Sunday. See the London Fringe Festival website for advance tickets and more information on the Impresario productions.