« “Maggie” to be awarded to Don Fleckser 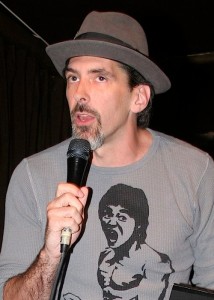 When I saw the lineup for this year’s Fringe festival, the first thought that came to mind was “look how many performers are back!” Of the 45 companies, fully half are returning for a second, third or even fourth time around; what’s more, half of those are from outside London. I’m always curious to learn more of the ideas and thought processes that go into making theatre, so I asked a few of the folks from away to talk about coming back to London.

Appropriately first up is Detroit’s Tommy Nugent, whose posters for Burning Man & the Reverend Nuge started appearing way back in April.

The first of six scheduled performances of Burning Man & the Reverend Nuge goes up at 9pm on June 18, the opening night of the 2010 London Fringe Festival. The single showing of American Bad Ass in London on June 24 is a 50-50 fundraiser for the Fringe festival.