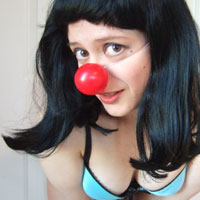 In 2006 Rachelle Fordyce brought her one-person show netherwhere:etherwhen, in which she played Charon, ferryman of Hades, to the Fringe festival. This year she’s back with unADULTeRATED me, a completely different show.

unADULTeRATED me is on at The ARTS Project until June 25. Please note that the production is for mature audiences only.