On the eve of its destruction, the once glorious Weissman Theatre is filled with the ghosts of its past as showgirls reunite to glamorize the old days and relive bygone memories of promise and splendour.

For two jaded middle-aged couples, coming face-to-face with what might have been proves to be a shattering experience. The genius script by Sondheim and Goldman makes a cinematic, dream-state of past and present blended together, employing lush era musical theatre pastiche and a deft eye for storytelling to tell not only the story of Ben, Phyllis, Sally and Buddy, but also the story of how the promise of America between the World Wars disintegrated into memory.

Considered by many to be one of the best American Musicals of all time, those that saw the original Broadway production in 1971 and the all-star Lincoln Center concert in 1985 remember it as one of the most dazzling and poignant shows ever. 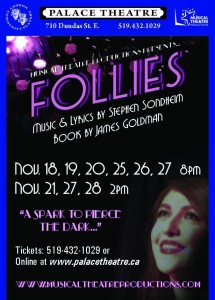