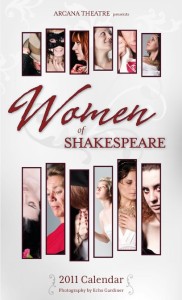 One of the newer companies in town, Arcana Theatre, has just launched a fundraiser for its next production: a calendar featuring a dozen of London’s female actors in Shakespearean roles from Juliet to Lady Macbeth. (I’ve purchased two extra copies, which I’ll give away at random to two people who comment on this post. See below for details.)

It’s surprising that having show- or company-related merchandise is a relatively rare occurrence in the city. LCP had a clever idea to sell Three Musketeers chocolate bars at performances of The Three Musketeers earlier this year, but I’m hard-pressed to think of anything else from local companies along those lines in 2010.

On the flip side, it’s more often than not that visitors will have something available to complement their performances. T-shirts and buttons are common, and there’s an occasional CD or DVD. I’ve even seen merchandise worked into a show: throughout Chris Gibbs’ and TJ Dawe’s mock seminar The Power of Ignorance the Vaguen character pushes his book, which is, naturally, available after the performance.

Fringe artists are probably the most consistent when it comes to having some sort of extra available. With more than 40 other shows to compete with for attention, having something to set themselves apart can make a big difference. The Fringe example can’t be set aside as a yearly anomaly, either: one local event site lists 40 music events in the city on an average Friday night, and with sports and other events there’s a lot more than that going on.

To be sure, there’s an up-front cost involved, which can eat into many shows’ already low budgets, and it’s not guaranteed that people will want to buy what you’re selling. There are a lot of creative ways to approach the problem for less, though: on-demand houses make it easy and relatively inexpensive to do small runs of a variety of products; artists are often willing to exchange goods and services; I even know of a band that sells homemade preserves at their shows. Something that doesn’t sell out isn’t necessarily a failure, either: look at the popular totes that a few enterprising and craft-y Fringe troupers put together from unsold T-shirts from previous years.

While products aren’t appropriate in every situation—it’s hard to imagine the producers of The Producers selling swastika armbands, no matter how funny they’d be in context—they’re often a good way to get advance word out about what a group has going on, and a recurring reminder after a show is over of a (presumably) enjoyable experience. If nothing else, merchandise for a show makes it a little bit different, and that might be enough to get someone to come see what’s unique the next time.

Draw Rules: Each comment on this post which names any woman who has played a role in a London, Ontario production of a Shakespeare play in 2009 or 2010 will be entered in the draw. Comments that also contain the actor’s role will get two chances. Winners will be chosen at random at 11:59pm Eastern on December 22, 2010. If a winner cannot be contacted via the email address provided another winner will be chosen.