Black Bag: Flowers For the Ripper

The series of brutal homicides that took place in the Whitechapel district of London throughout the autumn of 1888 has fascinated and baffled dedicated Ripperologists for well over a century. A situation fraught with misinformation and conspiracy theories, this telling of the Ripper tale focuses on his victims: six women doing their best to survive in a harsh and prudish era who had their lives snatched away from them by a bestial killer. Rather than focusing on a single suspect, Black Bag offers six, one for each of his victims.

Tickets: $15; available at The ARTS Project, 519-642-2767.
Opening night performance is a benefit for the Bruce Johnson Legacy Fund.
Playwright Jason Rip will be giving a special pre-show talk September 14 at 7pm. 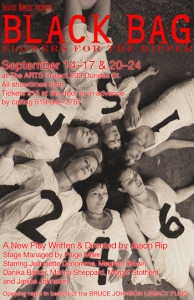