To Master the Art

A captivating look at the life of Julia Child. In a large country, France, combine two American newlyweds, a world-renowned cooking school and a dash of politics. Mix in one part new-found passion. Serve on a Grand stage with a healthy portion of laughs, love and joie de vivre. To Master the Art begins as young newlywed Julia Child arrives in Paris with husband Paul. With plenty of time on her hands, little to no grasp of the French language and a desire for purpose in her new life, Julia discovers Le Cordon Bleu cooking school and an appetite for a future in food.

Follow Julia’s intriguing and often-hilarious journey from her first days at Le Cordon Bleu studying the culinary arts to the debut of her cookbook Mastering the Art of French Cooking in 1961. A Canadian premiere. 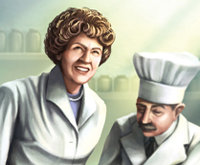