Billed as a stand-up-sit-down-one-man-comedy-nightmare, House is the twisted story of Victor. His mother is possessed by the devil, his sister loves a dog, he’s married to his cousin who doesn’t love him, and his father is the saddest man in the world. But instead of accepting his seemingly obvious role as the world’s biggest loser, Victor bursts through theatrical conventions in search of acceptance from his audiences. 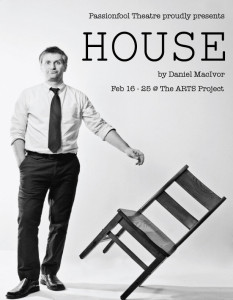