The Continuing Adventures of The Boneyard Man

Shake off your February blahs with The Boneyard Man!

Someone or something is blowing up quiet neighbourhood houses with no apparent motive or pattern — even the method is up for debate. Can The Boneyard Man discover the source of the disasters before everyone is forced to move downtown? Hint — the answer is in the title! But don’t spoil the ending for everyone else by shouting it out!

Road and Cranbrook must put on their kid gloves to deal with the increasingly bizarre crimes being perpetrated by New York’s newest, oldest criminal organization — The Golden Years Gang! Put the kettle on and crank up your hearing aids, ’cause this one’s a wham-dinger! I SAID IT’S A WHAM-DINGER, GRANDPA! WHAT? NO, NOT GRAM’S FINGER, I SAID — Here, don’t worry about it, sit down, I’ll make you some tea.

In order to win freedom for the crew of the U.S.S. Tin Pinta, Captain Speed must engage their captives in a deadly game of fatality…to the death!

Tickets: $15 adults, $5 children (under 16 with accompanying adult); available at the door. 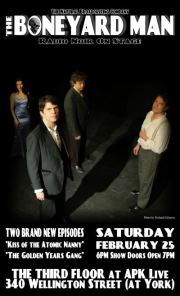