A playwright breaks his promise and tells a story he said he would never tell: this is the story of Althea, the only survivor of her family from an unnamed genocide. Althea became a prison guard to the intellectual behind it on trial many years later. However, he claims to have Alzheimer’s disease and cannot remember the past two decades of his life. This is a story of genocide; a story of broken relationships; a story of guilt and the loss of innocence, of love and hate, and asks the question “why do good people rush to do evil, and what do they become?” 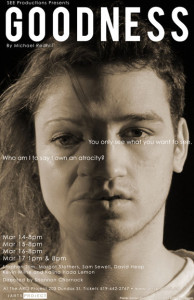