Three in the Back, Two in the Head

This celebrated thriller is the story of a man brought down by his own illusions and by the treachery of governments. A weapons scientist for America’s defense program is found dead outside a church. When his son attempts to piece together the truth behind his father’s death he is embroiled in a world of double agents, rogue states and global paranoia. Inspired by the real life murder of Canadian weapons scientist Gerald Bull, Three in the Back, Two in the Head grapples with the elusive nature of truth as the action shifts across conflicting versions of the past. Winner of the 1994 Governor General’s Award for Drama. 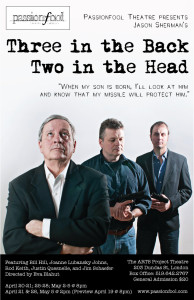