Othello is often cited as one of Shakespeare’s most tightly written scripts and as one of his most human of tragedies. The chilling events that unfold when jealousy, “the green-eyed monster”, is released from its cage will be given a modern twist as Othello commands a unit of the Canadian military in war-torn Afghanistan. 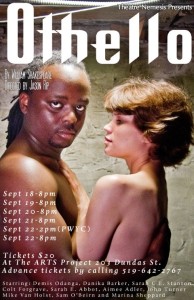