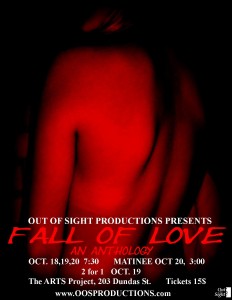 Directed by Steve Stockwell
Out Of Sight Productions
The Arts Project
October 18–20, 2012
Love is an emotion that can be understood, valued and abused, and often at the same time. This play is an anthology of wildly varying quality that illustrates that theme with an equally diverse mix of the realistic and the surreal.

This opening seems more a play towards the upcoming Halloween than keeping with the general theme of the stories. Unfortunately, as well made up as Darren Kovac is for his role, his attempt to perform the lines with an appropriate accent goes overboard to the point where I could barely understand half of what he was saying. So, Kovac achieves the atmosphere well, but loses out on basic coherence.

By Floyd Dell
Played by Anton Mijatovic and Nicky DeVeber

The sketch here is one of the funniest, of two prospective home buyers comparing notes and more after touring a house with an interesting past only to enter a bizarre romantic sprint of their own. Mijatovic and DeVeber have a nicely eccentric chemistry in a strange love story with a comically twisty plot that continually upends their and the audience’s expectations like a paint can shaker. The result is an unpredictable fun time in which a romantic pair begins with a wacky acceleration that feels oddly logical in its own terms.

The story here feels like a combination of Waiting for Godot and Ingmar Bergman’s The Seventh Seal, as the personifications of Life and Death wager on the fates of two young people. Realizing that this sketch is intended to be a kind of macabre fable, the dialogue still sounds gratingly stiff as most of the characters talk in stilted allegories and exaggerated overacting. It does not help that the characters, Calhoun as Youth and Reid as The Girl, are not allowed to develop a real humanity as that would defeat the very representative point of each.

Ferguson’s gravelly nasal voice feels particularly grating in this regard as Life, sounding less aged and more like a severe case of post-nasal drip. Kelly MacDonald on the other hand is a delight as Death, a snarky trickster who is ever with a raspberry for the highest ideals, allowing the whole story to have some much-needed levity. The fact that all he needs is a bit of pancake makeup for the right eerie presence is a mark of his skill.

After that mixed bag, this play is a dramatic treat as we see Harriet (Robertson) and her inner youthful voice, Hetty (Levi), play a humorously intense social call with the wife of a famous painter they once spurned. Here, the surreal nature is more restrained—to the sketch’s benefit—with the ghostly Hetty acting out Harriet’s baser desires and machinations she would never dare express.

With that in place, the resulting tea time makes their restrained polite conversation into a fun social contact sport of high society one-upmanship. Seeing Hetty slinking around, coaching Harriet in the best use of venom with a childish intensity, gives the sketch a strong thematic punch where real love is distorted by greed and baser emotions just under the polite veneer. Robertson plays off Levi well as her character tries to maintain a some self-control, only to see her bend to Hetty’s impetuous commands even while she struggles to keep her gracious façade up. Bonner has a special challenge herself as Margaret considering she has to have her own venom in this game evident in a more subtle fashion, as each strikes the other with egotistical agendas of their own.

The grand result is a bracing social fencing match that requires only some genteel furniture, tempting edibles and two upper crust gladiators with one gadfly mixing it up behind polite smiles.

By Alfred Sutro
Played by Tim Ingram and Annette Dennis

After that imaginative catfight, this final sketch feels disappointingly conventional as Sir Geoffrey Transom (Ingram) and Lady Torminster (Dennis) talk about their relationship with their friend. The players’ chemistry has a gentle refined warmth, with their conversation of romantic paths not taken having a generous wit to it, but there is nothing suggesting a real allegorical or fantasy element like the others. Essentially, it’s just a time for midnight confessions with some strong drink and gentility to lubricate them.

There is an intriguing twist at the end which puts the characters’ friendship into a different perspective, but it seems an inadequate use of the audience’s patience after the previous fantasies. Perhaps it would have been better to have this in the front to build towards the stronger material, but using it in the end feels more like an unimaginative let down.

All in all, the show is an imperfect collection, but a reasonably engaging one that speaks well of the cast involved.