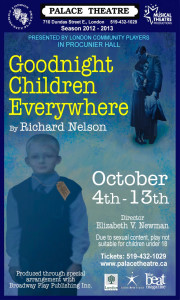 For many British urban children who were evacuated by the government out of the cities—and sometimes out the country—and from their parents, their lives and their relations with their own families would often never be the same. This play is a keenly challenging drama where one such family’s post-war reunion finds them them all struggling to comprehend that painful truth.

In June 1945 London, Peter (Kevin Curnette) returns from his five year evacuation to Alberta, Canada to the home of his sisters, Vi (Kalina Hada-Lemon), Betty (Whitney Bolam) and Ann (Heather May), as a strapping young rural Canadian. Once there however, Peter finds himself virtually a stranger in a family who have profoundly changed themselves through the years of war. As he tries to adjust, Peter finds himself in the middle of his sisters’ own emotional burdens and conflicts as they threaten to tear the family apart.

As much as I am familiar with the British wartime child evacuations, it never really occurred to me what it would be like for such families to reunite for those kids who were overseas for years. This play is a powerfully insightful look at such a situation in all its emotional complexity. In doing so, the story avoids the easy drama and goes for a warmly genial tone with a family trying to get back to normal, only to find that kind of normal is does not apply anymore. Just the scene of the childish piggyback feels painful enough considering the siblings have nothing else to remember with their brother.

As such, the character interaction has an artfully probing nature as they try to find a new meaning in their relations in view of how they all have changed. In that regard, Curnette and May make the most of the dramatic possibilities as their characters’ relationship crosses a line that such a long life-changing absence could make it feel acceptable. In doing so, they powerfully convey the emotional turmoil the evacuations wrought for such families, who have to rebuild with so little in common anymore. For that matter, the story takes on a courageous tone to discuss when that situation can affect the most intimate relations than a more contemporary drama would ever have dared approach. While the story’s pacing is a bit slow, that kind of honesty is painfully overdue for such history, and it deals with the matter with a welcome impartiality that modern drama should have.

On their own, the two are just as good, with Curnette playing Peter as a tentative brother trying to understand how his family has changed and struggling to fit into a domestic situation that does not really include him anymore. May is equally moving as Anne, the expecting young mother in a deteriorating marriage with Mike (Tim Condon), the stiff authoritarian doctor, and falling into a temptation with her brother that feels both so forbidden and so right with his long absence and personal change. In a sense, both brilliantly convey their feeling of being trapped by their circumstances and only with a measured acceptance can they find some peace.

Hada-Lemon and Bolam are welcome counterpoints with their characters to those central players. For instance, Vi has the powerful feel of an idealistic artist with a wry sense of humour that covers an ashamed professional practicality for her work, perhaps encouraged by her isolation as a child where she had to rely on herself. That works powerfully at the climax when she discovers her siblings’ dark secret, but is forced by her own choices to keep it to a hypocritical moralism behind closed doors. By contrast, Bolam is a statuesque figure as the eldest sister trying to live up to her late mother’s image as the responsible one in the family, especially after enduring a difficult billet in her evacuation as a child. When she discovers the price for that pretense, her need for own identity comes forward.

The other male players are distinctive in their own way. Condon is fun as Mike, the doctor husband of Ann who is the perfect representation of an old British patriarchy that Ann can’t help but chafe against. Meanwhile, Chris Albert is obviously having a ball as Hugh, the English gentleman whose charm is undercut with an oily snobbery that gets punctured so deliciously by Peter at the right moment. Finally, Clara Madrenas is charming as Rose, the true innocent in this story, as she finds herself unknowingly in the crossfire of this family’s emotional conflict.

This show was the first for me in the Palace Theatre’s Procunier Hall, and it was a rewarding experience. The small room allows for an enthralling intimacy to make great character drama work that a more remote setting like the main stage cannot allow. That is a vital element for a play such as this, just as much as the authentic looking costuming and the stage design. In short, the whole effect is like stepping into 1945 and viewing the time free of easy nostalgia and assumptions. Finally, the music makes that possible with a clever combination of period recordings like Vera Lynn and haunting modern songs that creates a clash of moods that complements the play’s hard-edged emotional complexity well.

The British child evacuations have a rosy look now, of a time and place when the most innocent of the potential victims of war could be reasonably protected from its brutal realities. However, this play will remind you of the costs of such measures where the spirit was sometimes profoundly wounded instead.