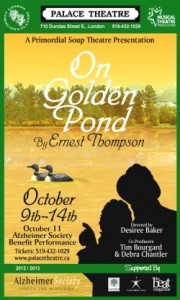 For most casual theatre and moviegoers, On Golden Pond is known primarily as the film that was the last thespian hurrah for Henry Fonda. However, this production will show you that the story is far more than that, with a funny and moving story about an elderly couple finding themselves having one last opportunity to enjoy a full family love that old wounds have denied for so long.

At a summer cottage at the shores of Golden Pond, Maine, the Thayers are settling in, with Norman (Ray Wiersma) being rather ill tempered while his wife Ethel (Sherly Scott) sees right through him. On his 80th birthday, his estranged daughter, Chelsea (Lori Fellner), comes to visit and to request that they take care of her boyfriend’s son, Billy (Fynn Cuthbert), while they travel to Europe. Their agreement leads to a summer in which everyone finds new chances to see the best in life and to connect.

I went into this show expecting simply a sentimental drama, but instead I enjoyed a surprisingly fun comedy about retired life and facing one’s twilight years. While the themes of old age and looming death are part of the story, they are not dwelt upon as more than a foundation for the characters to interact with their own philosophies with hard realities. As such, you can accept them not as victims of a maudlin story, but individuals facing unavoidable facts in their own ways while their personalities gently clash. With that interplay established, the moments when the lead characters face the more harrowing elements of their advanced age become all the more effective as real people in your eyes.

Wiersma and Scott make that kind of story work beautifully with a perfect chemistry that enables them to balance their lives’ bright spots and heartbreaks with familiar maturity as you would expect from an old married couple. Wiersma, for instance, does a superb performance as an old man who hides his mortal fears about his mental decline with an ornery crotchetiness in an almost unconscious effort to defy his age. When he lets that facade drop at his most vulnerable moments, Wiersma is heartrendingly moving as he invites you to understand what Norman truly fears even as he finds himself guided to some peace with it. Scott shines as Ethel by infusing a determined optimism that is painfully tested by both her husband’s morose grumblings and the real crises they share. Yet those trials never dominate her spirit and Scott still creates the perfect grandmother, albeit channeling Katharine Hepburn’s voice mannerisms with remarkable fidelity.

For her part, Fellner, who is perfectly made up as a close approximation of Jane Fonda, supports the leads with a pleasant performance of her own as the daughter who never felt truly loved in her eyes. Unfortunately, her reconciliation feels a bit rushed except for a vital tentativeness to it as a woman well aware that time is running out with her aged father. That helps save the play’s sweetest moment from feeling completely forced. Unfortunately, Chrisopher F. Parker is a disappointment as her boyfriend, Bill Ray. For a middle aged man who is supposed to be a successful dentist, Parker plays his character like a caricatured nebbish dealing with Norman. There is no nuance in the performance, which seems more a collection of ticks of a man with no self-confidence dealing with parents, like a stereotypical teenager.

However, Fynn Cuthbert is a delight as Billy, a preteen boy who tries to maintain a sophisticated facade of his own as a city kid, only to warm up to Norman and the charm of his old fashioned ways. Just seeing him introduce himself with a carefully insolent tone to the astonished old man is hilarious itself, while seeing the youth having embrace his life is charming. I just wish the same could be said about Len Cuthbert as Charlie Martin, the local mail carrier. While he does convey a certain rustic charm, Cuthbert still painfully makes his character a stereotypical rustic hick who almost seems autistic with his crude mannerisms. As a result, he feels largely extraneous to the story with more fleshed-out characters played by the others.

The stage is beautifully set with a clean rustic charm with a stubborn loose screen door that provides a marvelous amount of comedy. The sound effects complement that beauty such as with the loons sounding, and is perfectly played with Billy’s pranks. While it’s naturally disappointing that the score from the film adaptation couldn’t be used, the use of various recordings of the song What a Wonderful World conveys much the same dramatic power. This especially applies with the modern cover at the end, which becomes a musical symbol of what is achieved at the end.

Sometimes, the most honoured productions can be a bit offputting for the kudos they have received. Thankfully, this play overcomes that with a funny yet touching story about two elders finding their twilight years can still give them something to live for.