The Knight of the Burning Pestle »

A Closer Walk with Patsy Cline 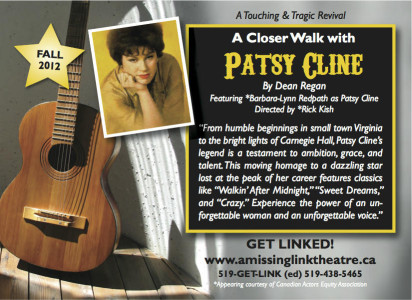 Country music is not a genre I follow, but even I know about the contributions of Patsy Cline. This play is a tuneful and reasonably engaging profile of her career, even if a taste for country and corny humour would be an asset in seeing it.

Through the words of WINC Radio, we follow the story of Patsy Cline (Barbara-Lynn Redpath), a woman who became one of the great female American pop singers and crossover country stars in the twentieth Century. From humble beginnings, we follow her musical career that took her to the height of fame until cut short in a plane crash in the early 1960s.

A Closer Walk is more of a country music revue, barely diluted with scripted drama, but is relatively engaging for that as an overview of Cline’s life and work. Make no mistake, however, that the framing story and its humour is highly reminiscent of the corny rural humor of the TV show Hee Haw, with some of the slightly more urbane material of Henny Youngman. However, the ending has some real power as the DJ learns about her fate, and the finale has a kind of soul that will move you more than you may expect.

As for the performances, Redpath has a great singing voice, playing the title role with gusto, while Dwayne Adams delivers some energetic humour as the DJ and the various comics. They are well supported with a great chorus of promising young singers. However, I am disappointed that while the male members get a chance to shine with two solo numbers, the female members don’t get a comparable opportunity. I realize that could have diluted the focus on Cline, but it still feels unfair on a fundamental level.

Finally, the stage’s design is remarkably flexible to be able to suggest everything from the most rustic country bar to Las Vegas and Carnegie Hall. All that is needed is some facades, descriptive signs and selective lighting to change the setting. The end result is an immersive show that can make non-country fans enjoy themselves beyond limits of personal taste for some good music.

Country music is not to everyone’s taste, but a good well-performed play like this rises above that for a tuneful and surprisingly entertaining show.