In the mid-nineteenth century a man who became known as Jerome was alleged to have been found on the shores of Baie Sainte-Marie, Nova Scotia, mute and missing both legs. He lived for over forty years with a local family. Many attempts were made to locate his relatives, with hopefuls rumoured to have travelled from as far away as Alabama and Milan, but when he died in 1912 the mystery of his background was still unsolved. The story of Jerome, the Mystery Man of Sandy Cove, has turned up in various collections of folk history over the years. A play centred on Jerome’s appearances as a sideshow curiosity. 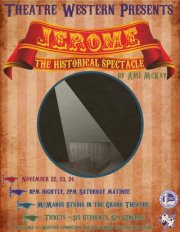