The Knight of the Burning Pestle

A hilarious comedy-turned-mock-heroic-drama, The Knight of the Burning Pestle involves a London merchant’s daughter and the inevitable tension that comes with love and the hierarchical standards of social class. The merchant’s daughter elopes with his apprentice and endeavours to escape her father’s discontent, only to be caught by him. Her father’s triumph in capturing her is squandered as his clever apprentice schemes to be reunited with his love. Alongside this action, two “play-goers”, a grocer and his wife, provide a metatheatrical take on the play as they declare themselves to be chief commentators of the performance, often (and rowdily) voicing their prejudices and adjusting the central plot to their tastes. The grocer willingly inserts his own apprentice within the play, not minding that players are now driven to improvise their plotline as their adventures are relentlessly interrupted by the grocer’s own intrigues.

Tickets: $15 adults, $10 students and seniors; available at Western Connections and at the door. 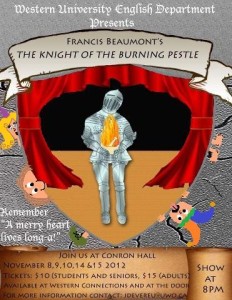 Presented by UWO Department of English