There are few plays as twisted, funny, bizarre, and utterly insane as Tracy Letts’ Killer Joe. Chris, a trailer park lowlife, has landed himself in hot water with some less-than-accommodating drug dealers. With mere days to come up with some cash, he seeks the services of “Killer” Joe Cooper—a Texas Ranger who moonlights as a gun for hire—to kill his estranged mother for her life insurance policy. In this dangerous game, failed plans and deals with the devil put everyone’s life on the line and each twist brings the story closer and closer to its dark end. This play is not for the weak hearted: with sex, violence and Southern fried chicken, Killer Joe is finger lickin’ bad. 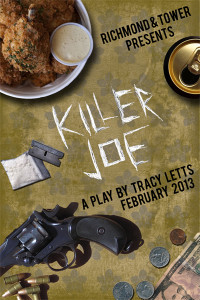