« Alice Through the Looking-Glass

Edward I is dead. His heir, Edward II, has taken the throne and recalled Piers de Gaveston, his banished favourite, from France. Much to the chagrin of his nobles, Edward bestows titles and land upon the lowborn Gaveston. Forced to banish him again, Edward vows revenge upon his court and his queen. Classes clash, regimes are challenged and hearts rule all as this reluctant King of England is torn between duty and desire.

Please Note: Due to depicted violence and mature themes, this production is not recommended for young viewers. 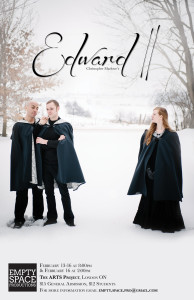