Colleening: The Poetry and Letters of Colleen Thibaudeau »

To Kill a Mockingbird 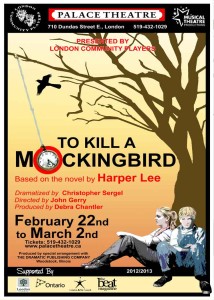 A great reputation for an adapted story can be as offputting as a put down if it has shown long enough. This local production is a sterling example of overcoming that: a sensitively dramatic telling of a classic that gives all the elements of that story world’s population their due while keeping its narrative power.

An adult Jean Louise “Scout” Finch (Alyson Nichols) tells the tale of how her father, Atticus (David Wasse), a respected lawyer of Maycomb, Alabama, decided to defend an African-American labourer, Tom Robinson (Jordin Hall), against a trumped-up rape indictment. Atticus finds himself opposed to his community’s virulent racism, of which Robinson’s main accuser, the foul Bob Ewell (Jeff Werkmeister), is merely the most blatant. As Scout (Sofi Kotilehti), her brother “Jem” Finch (Sam West), and best friend “Dill” Harris (Brett Martin) watch these events, their own innocence is lost as they discover the true complexities of their world.

Making a play that has been adapted as a classic film is an uphill battle for any theatre company. Not only is David Wasse set up for comparisons with Gregory Peck’s interpretation of his character, but the film bears its own unthinking racial assumptions of its time that have to be overcome. This play achieves both those goals beautifully within the confines of community theatre. For instance, Wasse confidently projects a masterful stage presence as Atticus, who carries a powerful moral authority that sadly is insufficient against the prejudice of his world, yet Wasse still has a loving presence as the ideal father that a child’s reminiscing would evoke.

More importantly, the play more finely integrates the African-American characters into the story as far as its racial realities allow. As such, the story comes off as less of Atticus being the benighted White hero for a passive Black population and reflects more of a reality that rings more socially true. For instance, Jordin Hall deftly plays his part as an innocent man with a strength of character from enduring a soul-crushing life to which a weaker person would have totally succumbed. Likewise, the other black actors like Sherine Thomas-Holder as Calpurnia, Tia Brown as Helen Robinson, and Kelly McDonald as Reverend Sykes, skillfully help establish his larger community who play an active part on his regard within the segregated limits of their era. That setup makes for a powerful contrast with Jeff Werkmeister as the villain Ewell, a bigoted loser who is all alone with the family he tyrannizes in a white community who cannot stand him beyond his race and their fearful need for the status quo. To create that imagery, Werkmeister creates a memorably despicable fool whose bellicose cowardice radiates with malignant presence.

However, the play hardly stops there as it spends considerable time with the lives of the feature children which allows the play to emulate their perspective as in the original novel. To that end, the life lessons the kids experience have an appealing mix of ideals and hard truths that great actors like Kotilehti, West and Martin convey with convincing authority. Kotilehti in particular carries her portion of the story with the competent thespian strength of a weightlifter in subtle coordination with Alyson Nichols as her older counterpart in perfect dramatic harmony. In support, West and Martin complement this tale of innocence gently lost from both the male and slight outsider perspectives that mix perfectly with the overall story.

Unfortunately, Helen Wainman regretfully feels one-note as the irascible Mrs. Dubose, the stuff of the Finch kids’ irritation, when some subtle note of her true hidden pain would have been welcome. Furthermore, while the climactic scene is rather awkwardly staged, it still conveys the story’s essential power as Scout and Jem find danger and help from where they least expect it, with Shawn McCarthy supplying it with an adorable charm.

Finally, what really makes it all work is the stagecraft which is remarkably simple and elaborate at the same time. That effect is created with an empty stage backed by simple white backgrounds and portable furniture that is easily positioned without having to close the curtain. This simplicity in both design and colour gives the whole show a shimmering dreamlike quality, rather like what you might expect from a story out of childhood memories.

Following up on a classic film interpretation of an equally classic novel is a challenge for any theatre company, but the LCP pulls it off with a fine rendition of their own that allows it to shine beyond the shadow of Gregory Peck.

A previous version of this review contained incorrect credits for Sofi Kotilehti and Helen Wainman. TiL regrets the errors.

2 thoughts on “To Kill a Mockingbird”