« To Kill a Mockingbird

Colleening: The Poetry and Letters of Colleen Thibaudeau 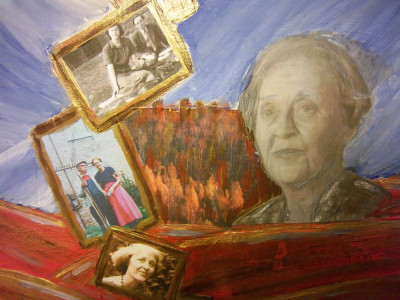 For anyone who would associate a play based on poetry to be dull: this production is not one of them. With a combination of drama and song, the players create an affecting life story of the soul of the poet, Colleen Thibaudeau.

The key element of this play is that Thibaudeau’s writings are not simply read, they are more performed and also sung in a stage that feels more like a grand surreal canvas for an aural painting of music. In that context, the poetry and correspondence recited become a lifetime of confessions and inspiration that followed the poet nearly throughout the breadth of Canada. Thus what could have been simply a dry reading becomes a lyrical journey of the soul.

That kind of well executed dramatism can only work with the right players and each of the cast meets that artistic challenge with a protean flexibility. Whether the words are sung or spoken, there is a vivid grace to all the players’ performances that bring Thibaudeau’s verse and prose to powerful life. That is beautifully complemented by beautiful piano playing by Stephen Holowitz who perfectly accompanies the lyrical action in perfect sync. The effect is made more effective with occasional deftly timed chimes that not only heighten the special atmosphere of the play, but give a useful timing cue for the cast to align their performances.

The stage works with that vision as well, as a kind of visual representation of the poet’s mind: a jumble of images of geography, ideas and memories that exists in the mind of any poet, waiting to be assembled into a lyrical beauty. Although it looks chaotic, it actually has a special order all its own that fully flowers at the end as the players climax the show putting it to full use.

It’s an easy assumption to make that a play based on a poet’s life and writings would be rather still and boring. However, watch this play and you will see a magical show of music, verse and prose like you’ve never seen before in Downtown London.