Mom’s the Word: For Crying Out Loud » 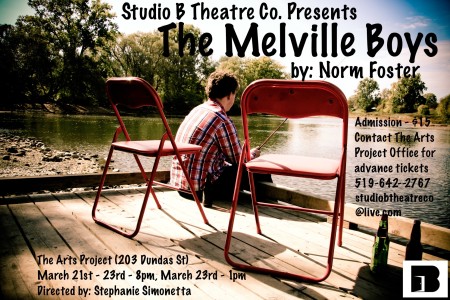 John Lennon once sang that life is what happens when you are busy making other plans, but what happens when you know it’s going to end soon? This play is an atypical exploration of that theme in a funny and moving story about siblings, dying and the ways that others can swept up in such issues.

In a country cottage, the Melville brothers, the mature Lee (Derek Roberts) and the immature Owen (Matthew Notarfonzo), come to spend the weekend at the family cottage, well aware that it will likely be their last time there. Once there, they meet up with two local sisters, the mature Mary (Emily DeRuytter) and the flaky Loretta (Kiersten Rozell), who are each drawn to the brothers in their own way. However, what could have been a simple weekend fling becomes much more as the women learn about the brothers’ strained relationship and the morbid truth of Lee’s health. In the aftermath of that revelation, the sisters’ reactions ignite an emotional maelstrom that will test the brothers’ relationship and their plans for looming realities they both face.

Norm Foster has been known for light comedies, but familiarity with his other work won’t prepare you for this. What you have instead is a powerfully bittersweet dramedy about two brothers trying to establish an understanding after years of misunderstanding and resentments for their dwindling time together. Regardless, there is plenty of intelligent humour in the story played masterfully by the cast, especially with Roberts displaying a hilarious slow burn that frames his character’s hijinks with Owen perfectly. Notarfonzo plays off that seriousness with a determined frivolity that seems annoying, but makes perfect sense on its own term as the story progresses.

However, the meat of the story is amply served by DeRuytter and Rozell as the women who inadvertently drive the main emotional action of the story as they find themselves in the middle of a slow motion family crisis. As Loretta and Owen cavort in their asinine ways, Roberts and DeRuytter play against that action perfectly as the responsible elder siblings helpless to steer their siblings away. As the elders share a special intimacy that the youngers cannot understand, the stage is set for a baring of souls that all the laughs will have set you up for maximum impact. Just seeing Roberts’ and DeRuytter’s characters interact after a painful truth comes is a joy of drama to behold.

When that happens, it will throw you for a disquieting emotional loop that will shake you completely. This especially goes for Notarfonzo who creates a heartrending performance that unexpectedly transcends his clownish character to reveal a man feeling profoundly trapped and overwhelmed by the weighty implications of his future life. In that regard, Rozell shines right on cue as her superficial character does the right thing by him almost in spite of her herself.

Ironically, that makes for an intriguing irony when Mary commits a terrible emotional blunder in the best of intentions. The results of that create a searing climax with the brothers that is harrowingly unpredictable with challenging dialogue and narrative red herrings that puts all the story in an insightfully different perspective. The result is a story that refuses to offer easy answers or resolutions, just four confused people trying to live their lives as far as their circumstances allow them.

To frame it, the play is set in a well constructed set of a cabin with three doors that effortlessly create the illusion of a larger world. With that set, the basic costuming allows the cast’s performances to give the space life in a way that will suck you in. Furthermore, the contemporary music allows the casual tone of that story to be set with ease.

That “you can choose your friends, but not your relatives” may be an old adage, but this comedic drama is a powerful examination of that truth, leaving you with a special understanding that the best of drama can provide.