« Colleening: The Poetry and Letters of Colleen Thibaudeau 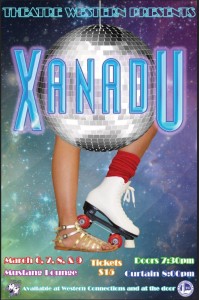 It’s strange how pop culture can lift a flop from the scrap heap and allow it to find a special charm of its own. This play is a glowing example of that as an adaptation of the notorious Olivia Newton-John film with all its tuneful magic intact while having its tongue firmly planted in cheek.

In 1980 Venice, California, Sonny Malone (Adam Bornstein) is a frustrated artist who has lost all hope. However, the muses he drew in a chalk drawing come to life, and their leader, Clio (Alene Degian), resolves to help Sonny in disguise. In doing so, she inspires his wild idea for a roller disco arts centre and meets the cynical property owner of an empty music hall, Danny Maguire (Stephen Cris), who finds Clio strangely familiar. In the midst of this inspiration and renewed hope, two of Clio’s jealous sisters plot to sabotage her life and it may take all the power of love and creativity to save the day for them all.

The original film was a victim of its own artistic failings, such as not having a completed script before shooting, and the bad luck of awkwardly finding itself in the middle of disco’s fall. The play revels in the film’s underdeveloped fantasy and disco sensibility and runs with it. The self-aware references to the original work’s strange plot holes and casting decisions are just the beginning of the mirth. I just wish they could have kept more of the film’s theme of the reconciliation of generations, such as how the nightclub found a way to fuse Danny’s swing nostalgia with Sonny’s modern sensibility. Regardless, the result is a play that is a dazzlingly entertaining comedic poke at the campy cult classic, while still keeping its ideas with a real sincerity.

Even better, the music of the film helps seal that artistic deal with all the classic hits that were created by the Electric Light Orchestra, with additional songs like Strange Magic and Evil Woman. To make that possible, there is a live band that captures that magic music with a virtuoso skill, although the music sometimes drowns out the singing. Unfortunately, the occasional technical failures with the actors’ microphones make that worse.

As ever in musicals, the players are essential to make the show work. Degian has the especially intimidating challenge of emulating Newton-John’s angelic role and singing voice at her peak. However, she pulls it off, masterfully creating a character with an innocence that is combined with an ancient wisdom and practicality for her calling. Her singing alone is enough to sell the whole package to charm any audience. For his part, Bornstein is the perfect lead for this musical comedy as Sonny. He displays just the right tone of naivete without coming off as a dufus, showing a powerful sincerity for his character’s artistic dream. He actually feels like an artist with an eccentricity that can create wonders with the right spark to set him alight.

Unfortunately, Gris is simply too young to pay Gene Kelly‘s role from the film as the old cynical musician, and the makeup for his role is simply inadequate for the illusion of age. That being said, he does have a fun comedic presence with an excellent singing voice, and his performance as Zeus is exquisitely bombastic. By contrast, Gillian Hosick and Erica Seetner are deliciously nasty as the villainous Muse sisters, Melpomene and Calliope respectively, especially when they perform Evil Woman with gleeful abandon.

Finally, the production values are excellent for the limits of student theatre. The company is obviously well aware that there was no way they could have emulated the grandiose visuals of the film’s roller disco and instead create more of an atmosphere of the ideal. With that context, it’s amazing what a few simple props like a well placed sign, a few Greek columns, a well timed fan, and glitter balls can do to create a powerful statement about the quest for artistry that is genuinely affecting on a human level. It serves as a frame to the music and it all comes gloriously together for the finale title song, a piece that has always felt both uniquely of its time and timeless in its own way.

I have often felt that musical theatre’s recent habit of adapting film was a dire sign of the art’s creative impoverishment. However, much like the The Lion King, this play is a stellar example of what the stage can do to redeem an cinematic and artistic failure and create something magical with the creativity that it joyously celebrates.