“When your time comes to die… sing your death song and die like a hero going home.”

In 1813, war invaded the “Western Corridor” of Upper Canada: farms were burned, crops were stolen or destroyed, settlers were left to starve. In the midst of the chaos and suffering, one event stands out as supremely important in its impact on history: the death of the Shawnee leader, Tecumseh, at the Battle of the Thames on October 5, 1813. Nobody saw Tecumseh fall—but everybody heard in the sudden silence that his mighty voice had been stilled.

Tickets: by donation; available at the door.
Additional area performances from April 13–19. 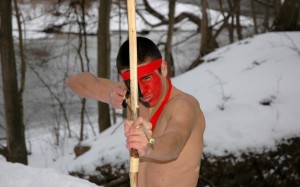