Scorched tells a story that begins at an end. A woman has died after years of complete silence, leaving her will in the form of a task she wants her twin children, Janine and Simon, to complete. Haunted by their mother’s silence and her final wishes left only on paper, the twins embark on journeys that bring them to a country tarnished by war, violence, and hatred. As they encounter people from their mother’s past, her journey through a world engulfed by civil war is revealed, and the twins’ journey into their mother’s silence leads them to the most horrific revelation of all. 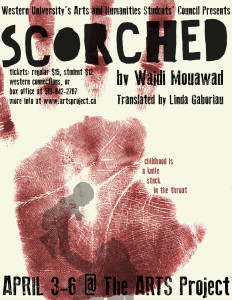