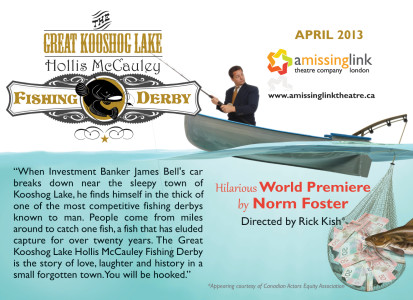 The “fish out of water” plot has been a standard for generations and can come off as a cliche if not done well with heart, wit and imagination. Fortunately, A Missing Link has achieved a hilarious and oddly touching, if occasionally mawkish, show with their world premiere of Norm Foster’s play.

James Bell (Dwayne Adams), an ambitious investment banker, has his car break down in the rural community of Kooshog Lake and finds that he’s stuck there for the weekend for more than one dispiriting reason. With nothing better to do, he gets to know the eccentric locals and enters the annual fishing contest. Along the way, James discovers the best qualities of the strange community he is in and finds himself reconsidering what he really values, even as his ways shake Kooshog Lake up on their own.

I came to the play a bit wary of the age-old story premise, but I came out knowing that I should have had more faith in Foster and company. This show is an infectiously funny tale where a big city guy finding himself in a village feels like a Northern Ontario version of TV’s Hooterville‘s small town lunacy with the mature emotional content of Cecily, Alaska in Northern Exposure. The mix creates a fun rural ambience of a town that knows its idiosyncrasies and is self-aware enough to mischievously mess with James’ head with them. Yet these people are not easy caricatures as in Green Acres, but emotionally believable characters with their own problems and assumptions that James jolts them out of. That in turn makes the humour and the dramatic story points have a real sense of narrative force as they find that they need that shake up in their lives.

As the lead, Adams exudes a good sense of fun as a city slicker who finds a life that offers him far more than his regular life in the city is threatening to take away. In fact, one of the character’s most effective qualities is as a habitual inadvertent cutter of Kooshog Lake’s emotional Gordian knots when he applies his own cynical practicality. The town may be playing with James’ head, but seeing him give as good as he gets without fully realizing it is a refreshing change from the usual unequal narrative duel from this kind of plot. That character’s personal growth is neatly matched by Rachel Jones’ enjoyable Melanie Morningside character, a woman whose emotional maturity is intriguingly balanced with a certain small town naivety and lingering emotional pains that are respectively less and more than it seems to James.

The result is superb emotional chemistry that feels charmingly real as James clumsily tries to get along with Melanie, even with her simple bluntness cutting down his insinuations with confident ease as they warm up to each other. As a result, it feels more believable with its emotional content and progression than the typical romantic subplot allows. Unfortunately, the plot’s romantic sentimentality sometimes comes a little too thick, bogging down the play’s pace especially with the somewhat overlong epilogue. While it’s not a fatal flaw, some judicious compacting of that scene would be worth considering to maximize its impact.

In support of that interplay, Julia Webb has a real emotional power as the wizened store proprietor, Sienna, who keeps a certain emotional distance from strangers even as she struggles to contain her own sense of loss about her own son. That makes Martha Zimmerman stand out well as Rhonda, a woman whose aggressiveness in romance and business which is made effective with Zimmerman’s perfect comedic timing and energy. Just experiencing her ubiquity in the village’s economy and how she takes advantage of that is comedy gold that has not been so well mined since Frank Nelson’s seminal comic performances with Jack Benny. Yet there is an endearing insecurity to that performance that gives the character’s forcefulness a vital perspective that carries further than simple laughs.

For himself, John Turner distinguishes himself yet again as one of London’s great thespians as Kirk Douglas, an easygoing town patriarch who has a casual wisdom allowing him to help the whole community in his own laid back way. In effect, he is like Sam Drucker in Hooterville, a likeable normal guy who becomes the story’s bedrock, allowing the silliness around him to have a necessary balance to feel like there is a functioning community of people. That would seem like a boring character in description, but Turner’s comic skill makes the character sing with a personable charm and quirky wisdom that will win you over.

Framing this is some stagecraft that suffers from uneven results in different aspects. For instance, the sound effects are superb with well chosen music and sounds to accentuate the action. In fact, a harp sound creates the funniest gag of the story with well chosen foreshadowing and the good sense by the company to not overdo it. It also helps set up a much more poignant element to the story that respects your intelligence with the preparation. Unfortunately, the lighting does not equal that aural virtuosity with the light manipulation for the scene transitions being disappointingly clumsy, although I understand the technicians were shorthanded for the show I watched. That said, the facades like the convenience store and dock makeups help create a whole beautifully rustic world.

While the plot is familiar with its occasional sentimental excesses, this play is more than redeemed with the kind of wit and humour that we should expect from one of Canada’s greatest playwrights.