Giant Invisible Robot is the story of Russel, a painfully shy young man whose imaginary friend, a giant invisible robot, has stomped alongside him right into adulthood. Told in a series of vignettes, the tale follows Russel’s attempts to find love, purpose and clarity — while simultaneously trying to keep Robot from destroying the Earth one city at a time. 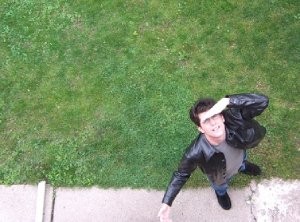