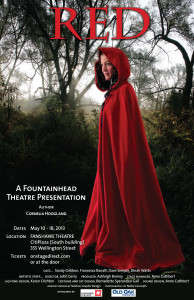 Red Riding Hood is far more than a simple children’s fairy tale; it is a story loaded with potent metaphors about femininity, sexuality and related themes. This play takes advantage of that special literary significance to create a moving drama about one woman’s emotional journey as it moves from the symbolic to the painfully real for her.

Considering the more literal interpretations of the fairy tale, this play is a refreshing change of pace with its metaphorical approach. To that end, the play creates a smoothly-paced parable that moves from the symbolic to the realistic wrapped in a coming of age story that carries you along like on a raft on a gently flowing river. It starts with the obvious analogy of an immigrant child’s trust in a journey home and moves gradually to her growing into a woman burdened with responsibilities and regrets as she stretches out again. As such, the play will challenge you to find its real theme and it plays fair enough to allow you to find your own answer.

For such a story with parables and imagery, Francesca Ranalli is a marvel as Red. With only her expressions and voice, Ranalli effortless creates a vivid character who matures with startlingly convincing power. Her skills reminds me of Christopher Reeve’s own celebrated talent playing Clark Kent, and Ranalli’s own performance plays an equally magical role in service of the story. Dinah Watts is equally impressive as Thelma, a wary immigrant mother who bemoans her daughter’s assimilation and choices, only to adjust in a way that Red ultimate cannot herself. Seeing Thelma journey to an emotional destination while Red becomes mired her in her own spiritual quagmire makes for an intriguing contrast that highlights both the mother’s achievement and the daughter’s loss.

The male leads playing the “wolves” of the story are a bit more uneven in their roles. Sandy Gribbin feels more protean considering he plays not only the taxi driver, but also Red’s son among other characters, dividing his stage presence. However, that allows him to become more ambiguous thematically as he presents a kind of masculinity that feels vaguely threatening. However, Dave Semple is terrific as the professor, a man who has a growing attraction to Red with her perception and will, but ultimately falls victim to her emotional misanthropy that he cannot overcome. Throughout Semple’s performance you see a mature man carefully pursuing a friendship within the bounds of propriety, only to make other connections Red cannot truly share. The result of such interplay is a production greater than the sum of its parts and a moving dramatic experience created from that.

Finally, the stagecraft has a brilliant originality: the allegorical forest of the story is a large collection of hanging men’s suits, bunched together with subtle care like trees. With that one look, we have a setting that instantly conveys the metaphor of society and masculinity’s effect on the perception of it. The hanging clothing also allows the cast to easily hide props and move secretly with the display with little impediment. Combine that with the lighting and music effects, and a whole world is created, which allows us entrance to explore both Red’s spirit and the outside world of it.

Red Riding Hood has enjoyed a wealth of interpretations and this play is a welcome addition, using its familiar imagery to create a intelligently challenging story of its own.