Six Funny Ladies: 14 roles, 6 actors, 3 plays and one helluva good time! A tribute to the Andrews Sisters, this is a collection of 3 one-act comedies written and set in the 1940s. Each play is roughly half an hour and there will be 2-10 minute intermissions.

Girls Must Talk by Paul T. Gantt
Set in New York, early morning, May, late 1940s. Two women are prepping the storefront “dummies” before opening their store. But who are the dummies… really?
Lady Rosa by Maud Merritt
Set in New York, late afternoon, September 1944. Three roommates are getting ready to meet one of their soon-to-be mothers-in-law. They’re running all over the place to ensure that they will present well to this mysterious Lady Rosa. But how will they react when they discover she isn’t who they thought she was?
Gander Sauce by Betty Smith
Set in Detroit, early evening, December 1942. A mysterious woman awaits the arrival of two young and attractive women. The only thing they have in common is… a man. 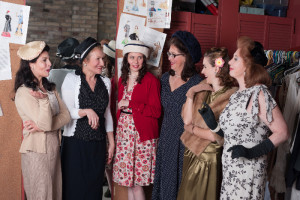