In June of 1959, 12 year old Lynne Harper was found raped and strangled near Clinton, Ontario. A few months later her classmate, 14 year old Steven Truscott, was convicted of her murder and sentenced to hand. The play recreates the world of Steven Truscott, suddenly twisted from an idyllic small town community into a nightmare of grief, fear, police questioning, rumour and innuendo. As an audience, we are lead through the case anew as ten actors playing over forty roles, shed light on what is considered to be Canada’s most notorious wrongful conviction. 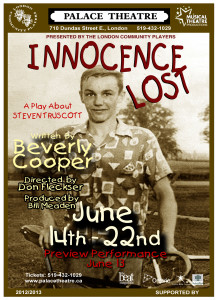