See The Canterbury Tales told with a Monty Python flair! Many believe that Chaucer’s literary masterpiece revolutionized English literature. You’ll meet many of the pilgrims who tell his tales, including the Wife of Bath who has cleaned up her act for this adaptation and is now a nagging woman who sells self-help DVDs. The Miller makes an appearance too, though nobody wants to hear anything he has to say! Game show host Alex of Trebek and talk show host King Larry contribute a huge dose of additional irreverent fun, as does Geoffrey Chaucer himself. 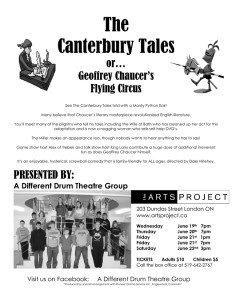