Stop the presses! The Natural Broadcasting Company has been released from prison en masse and have decided to jump headfirst into a brand new season without any heed or warning!

We’re all very excited for this landmark season — particularly head writer Jameson McDermott who has shunned the weight-lifting and hoop-throwing delights of yard time in favour of concocting a fiendishly fun season-long event. Doomsday Clock is a twelve-part story arc that will wind through the season and culminate in a bangtastic climax come May. Get ready for a return of some of the most nefarious villains and stalwart heroes that have appeared in The Boneyard Man‘s adventures over the past fifteen years! You won’t want to miss a single episode! And here’s more exclamation marks!!!

The Lurid Crime Docket: “Catmergency”: Fitzhenry meets his match when a cat gets stuck in a tree. Seriously, that’s the whole premise.

It’s the start of another nail-filing, pedicuring, hair-cutting season of The Boneyard Man! Old No Eyes wants you to drop everything and head on down to the LMC this Sunday — and The Boneyard Man always gets what he wants! If you replace “always” with “never” and “gets” with “buys” and “what he wants” with “street meat.” 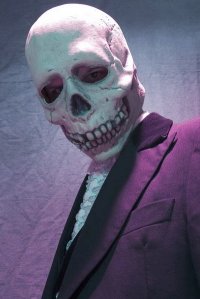