« Ties of Blood: The Brontës

The Tale of London Town »

The Pirates of Penzance

Frederic has been taught since childhood to be a pirate. With his 21st birthday approaching, Frederic wants to leave pirating behind, especially after he meets Mabel. The Pirate King does not want to lose Frederic so he informs Frederic that he was born on the last day of February on a Leap Year—so he is not technically 21 yet. To Frederic’s embarrassment, the Pirate King’s next target turns out to be Major General Stanley, Mabel’s father!

Songs include Poor wand’ring one and I am the very model of a modern Major-General. 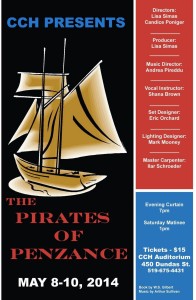 2 thoughts on “The Pirates of Penzance”