After his treacherous brother usurps him as the Duke of Milan, Prospero and his daughter Miranda are cast away at sea and find themselves stranded on a deserted island. Then—twelve years later—fate sets his enemies on a journey which brings them on a collision course with his island. Prospero calls upon magical assistance to raise a storm that brings them to his reckoning once and for all.

His enemies—including his brother Antonio and the King of Naples, Alonso—within his grasp, Prospero sets about a plan for vengeance. When Miranda falls in love with Alonso’s son Ferdinand, Prospero’s need for personal vengeance is set against his hopes for the future of his family. With his increasingly hostile servant Caliban set upon his own course of vengeance, Prospero must decide upon a course of action quickly or forever be stranded.

A pre-show “Shakesperience” chat with Dr. M.J. Kidnie will start at 6:45pm. 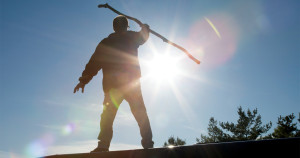