While Egon Schiele painted some of the most shocking nude portraits of the twentieth century, he is also a creator of some of the most haunting and sensitive portraits of his time. An artist of great promise at a very young age, Egon is a character whose passion for life and uncompromising originality of style put him at odds with many of Vienna’s leading figures and eventually with the law.

Shadfly focuses on Egon Schiele’s relationship with his model Valerie “Wally” Neuzil, a former prostitute and model of Gustav Klimt’s who becomes Egon’s manager and lover. Egon and Wally’s stories grow complicated, however, when Egon is forced to choose between furthering his career as an artist, and staying with Wally.

In their twenties, Egon and Wally’s lives are put on hold as Austria becomes entangled in World War I, and Egon is conscripted. The play culminates during the deadly Spanish Influenza outbreak that devastated Europe near the end of the Great War. 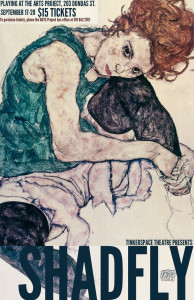