Beatrice Chancy is an adaptation of a well-known story from 16th-century Rome, where a young woman, Beatrice Cenci, killed her father after he has raped her. The story of Beatrice Cenci inspired many writers, including P.B. Shelley, who in 1819 turned it into a drama, The Cenci. In 1837, Stendhal transformed the story into fiction, and in 1971, Argentinean composer Alberto Ginastera made it into an opera.

This version of the story is set in Nova Scotia’s Annapolis Valley in the early 1800s, a time of slavery in Canadian history. Beatrice Chancy, the daughter of a slave who was raped by her white master Francis Chancy, has just returned from a Halifax convent and falls in love with Lead, another of her father’s slaves. Beatrice Chancy is both a play and a libretto for a chamber opera; this performance will include selections of both the dramatic and musical versions of the text. It’s an interdisciplinary performance that’s not to be missed!

Professor Clarke will introduce the performance, and present a public lecture on November 13. 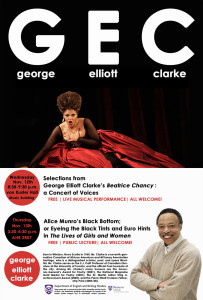 Based on Percy Bysshe Shelley's play The Cenci, and the life of Beatrice Cenci