Bare: A Pop Opera is centred around a group of friends in their senior year at a Catholic boarding school. The main characters, Peter and Jason, carry on a closeted romance. Peter wants to go public with their affair, but Jason isn’t so keen on the idea, and feels that his entire world would crumble if the relationship got out. The teenage characters of St. Cecelia’s deal with issues of inclusion, same-sex marriage, drugs, and suicide throughout the story. 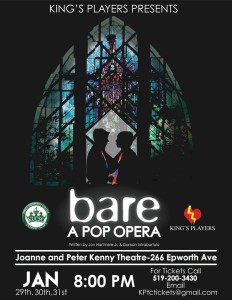