« Breaking and Entering My Heart

Jersey Boys is the story of Frankie Valli and The Four Seasons: Frankie Valli, Bob Gaudio, Tommy DeVito and Nick Massi. This is the true story of how a group of blue-collar boys from the wrong side of the tracks became one of the biggest American pop music sensations of all time. They wrote their own songs, invented their own sounds and sold 175 million records worldwide – all before they were thirty. The show features all their hits including Sherry, Big Girls Don’t Cry, Oh What A Night, Walk Like A Man, Can’t Take My Eyes Off You and Working My Way Back To You. 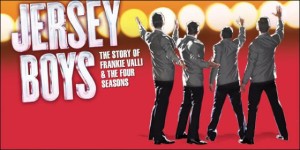