The opera concerns a young woman, Marie, who after being found on a battle-field as a baby is adopted by a military regiment. Later, her life is saved by a young Swiss man named Tonio who joins the regiment. However, she is forced to leave Tonio to live with her wealthy aunt and marry a nobleman. In the end, Tonio is promoted to Captain and is finally able to marry Marie. 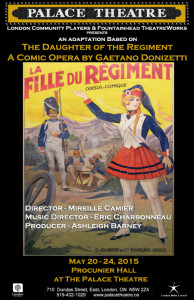