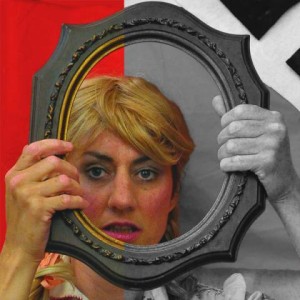 It has been said that everyone is the sum total of their family’s past. Annette Roman apparently has the most diverse past as you can ever get in western culture. With that heritage and her own relationships in mind, Roman has created a superbly bittersweet one-woman comedy about family as a personal confessional.

As a woman who is a child of a Jewish Holocaust survivor father and a Hitler Youth mother, Annette is in a unique position to describe the mixed emotions to have two parallel heritages to honour and disown. Roman approaches this family situation with the same thoughtful nuance as Art Spiegelman‘s classic sequential art Holocaust narrative Maus, with her own unique point of view. Namely, she makes no secret about how her father was a heartless womanizer who later disowned her, while her mother was a loving eccentric with her own kind of stubbornness.

The fact Annette Roman can take on such an emotional minefield with such understanding in her humour is a masterwork of personal comedy. That is further enhanced with playful teasers and inside jokes with things like Hogan’s Heroes that put Roman’s own personal questions and experiences into enjoyable character play that refuses to be emotionally simplistic.

The emotional complexity then carries forward as Roman has to deal with the hateful idiocies of a white supremacist boyfriend and Tea Party protesters she encounters.  As she tries to cope with them with restrained politeness or incensed confrontation respectively, the effect of her past puts the interaction into a powerful context as she struggles to square such struggles with her own conscience. Even as she occasionally blows the personal conflicts out of proportion, you can’t help but laugh at the simple recognition that you would likely find such conflicts of spirit and conscience no less daunting a challenge.

Dealing with one’s family past and deciding how to respond to your own contemporary challenges is a fact of life for everyone. Annette Roman takes her own extreme example of this and makes it into a fun show that becomes a personal acknowledgment of the sometimes bizarre mosaic of emotions and principles that is individuality.