“Two households, both alike in dignity, in this fair London, where we lay our scene.”

The introduction to William Shakespeare’s play is well­-known to many. But what’s that? London, not Verona? Romeo and Juliet is a bold reimagining of the original script, preserving Shakespeare’s language and story while molding it into a relevant statement on contemporary culture.

Performed in the round, with audience members literally following the action through a historic building, this is a complex and human story of love, acrimony, and the choices we make. A diverse acting company brings a modern perspective to the bitter rivalries, close friendships, and dysfunctional family dynamics that feed and frustrate our desire for love.

Space is very limited; only 25 audience members will be admitted per show. The performance requires that audiences follow the action, including up and down flights of stairs. 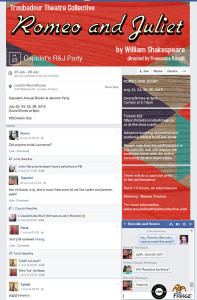