The Strange Case of Dr. Jekyll and Mr. Hyde

The play takes place in Victorian England and tells the story of Dr. Henry Jekyll, a scientist and prominent physician who dabbles with the macabre and discovers secrets that were better left buried. The character of Elizabeth was not in the original story, but adds a romantic element to the characters that makes them more dimensional. 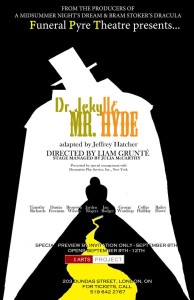