« Joseph and the Amazing Technicolor Dreamcoat

Fly Me to the Moon »

Tell-Tale
Emil, the mild-mannered undertaker whose unspoken passion for a woman leads him to confess his true feelings before time, and bodies, run out.
The Thief of Tears
Mac, a beautiful L.A. drifter and professional corpse robber, returns home to collect her inheritance. Things don’t go as she plans.
Thirteen Things About Ed Carpolotti
Virginia is the widow of a wheeler-dealer contractor who left her in a lurch. She is in debt to family, business associates and the mob as she faces the secrets the dead left behind. 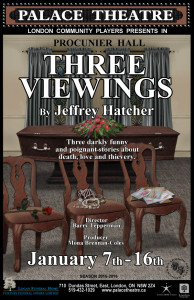