A story told as a memory, The Refugee Hotel is grounded in autobiographical details from playwright Carmen Aguirre’s own experience of having once arrived as a refugee in Canada. It is February 1974, months after the onset of the Pinochet regime, and eight newly arrived Chilean refugees await resettlement in a Vancouver hotel. These refugees are survivors of political oppression who undergo a process of reinstating identity as they navigate their newfound realities. In forging community with one another, old and new relationships are interrogated, however these explorations are punctuated by infiltrating nightmares of their recent pasts.

The Refugee Hotel is a dark comedy that takes an uncompromising look at exile, torture, guilt, and betrayal, and is ultimately about love and its power to heal. 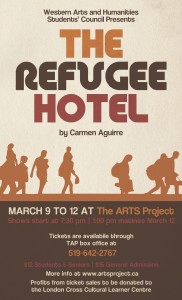